In recent years, Chinese artist Zhang Huan has turned his back on the aggressive performance and installation pieces of his youth to embrace Buddhism and its  serene understanding of the world—though the philosophy had never been far way from his life. His latest meditative work, Sydney Buddha, is currently on show at Sydney’s Carriageworks, as part of the Sydney Festival, and continues the art center’s ambitious program of bringing international artists to the city. Last year’s program included Christian Boltanski’s monumental installation Chance (2011), and 2013 saw Song Dong’s paean to futility, Waste Not (2005), which turned more than 10,000 items of domestic rubbish into a work of art. As this year’s featured artist, Zhang Huan has more than risen to the occasion with Sydney Buddha, turning 20 tons of incense ash gathered from Buddhist temples into a monumental sculpture—a work that touches on the inevitable consequences of life. Standing in the presence of the work, one can sense decay and death—and yet somehow also a hint of hope—hanging in the air.

Buddhism is the most common non-Christian religion in Australia. The country is also home to Nan Tien, the largest Buddhist temple in the southern hemisphere. Nan Tien, in Mandarin, means “Southern Paradise,” an apt translation considering the manicured lawns, bamboo stands, koi pond and Chinese vernacular architecture housed within the temple’s Wollongong compound in New South Wales. Upon entering the temple, visitors are often seen lighting incense sticks in a special burner as part of a religious ritual.

Burning incense gradually transforms into fragile sticks of ash, until gravity, or the merest breath of air, turns them into dust. The fragility of such ashes is something that Zhang has experimented with in recent years—including in his paintings and giant Buddha sculptures, which have been made using the temporal material. Depending on the atmospheric conditions of Carriageworks, Sydney Buddha may end up crumbling into little more than a pile of sacred ashes by the end of the show’s run.

Zhang is one of China’s premiere artists, who has been living in Shanghai since 2005, following several years in America during which prices for his work sky-rocketed in the art market. Upon his return to China, Zhang’s initial goal was to employ 50 assistants, a figure which has more than doubled over time. When I visited the artist’s studio in 2007, I saw his “ash-sorting room,” where six men were crouched on haunches while delicately separating the ashes into different colored piles of gray, soft white and coal black. The smell of incense in this enclosed room was intoxicating, and the assistants’ task of sorting the ashes appeared as a monumental execution of patience. Zhang assured me that this same production process it is still practiced today.

The ash used in Zhang’s work comes from Buddhist temples located near Shanghai, and the 20 tons used in Sydney Buddha took the artist three years to collect. “We treat the ash as a precious gift from the temples . . . we make a donation [to them in exchange] and invite the blessings that come with the ash to our studio,” Zhang told ArtAsiaPacific through an interpreter.

Sydney Buddha is, in fact, comprised of two statues, each standing 5.3 meters tall. One is an aluminum mold from which its mirror image is cast from a mixture made of ash and water. Upon removing the mold, the ash Buddha is completed, with the structure of its face and and one hand supported by special masks. These masks were later removed once the installation was premiered in Sydney, lending a performance element to the work. The raised hand, representing Buddha’s fearlessness, crashed silently down while the facial features fell away like wisps of clouds. The two statues have since been left facing each other in inquisitorial repose—the aluminum figure representing permanence, while the ash-Buddha, designed to disintegrate over time, embodies transience.

Commenting on the abandonment of his earlier gritty performances in favor of calm, spiritual works anchored in Buddhism, the 49-year-old artist insists “it is all to do with age.” Whatever the reason, it seems Zhang has discovered an inner peace that is manifest not only in his art, but in the asceticism that he practices in his daily life. “These Buddhas are not simple Buddhas, but are collective memories and hopes of our Chinese peoples,” says Zhang. “When I was young I always had a lot of fear and insecurity and aggression, but now that I am almost 50, as Confucius once said, I can see the end. [In] China we aspire for the ‘Chinese dream’: the revival of our culture, our history, our civilization. Our Chairman Xi Jinping says the day we realize the Chinese dream will be in 2049, one hundred years after Chairman Mao declared the founding of the People’s Republic of China. We believe this.”

“Zhang Huan: Sydney Buddha” is currently on view at Sydney’s Carriageworks until March 15, 2015. 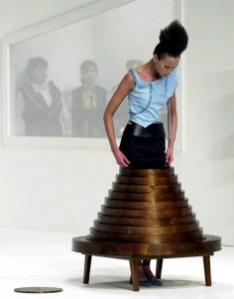 It would be a crime to pigeonhole Hussein Chalayan. Best known for fashion design, the two-time British Designer of the Year has also had his works displayed at prestigious art museums, and his avant-garde catwalks are often dubbed performing art shows in their own league.

The boundary-breaking creative mastermind has made forays into various creative aspects, from art to architecture to film and theatre. Known as one of the industry’s most intellectual designers, Chalayan has debuted short films at the Venice Biennale, and his retrospective exhibitions have been staged at museums across the globe.

After earning a fashion design degree from London’s Central Saint Martins College of Art and Design (close to the time when the other two celebrated British designers, Stella McCartney and Alexander McQueen, graduated), Chalayan started his own label in 1993 and has since come a long way.

His graduation collection, titled “The Tangent Flows”, which featured oxidised silk dresses buried underneath a friend’s garden for months, was such a hit that influential buyer store Browns bought the entire collection.

Following the hit debut, Chalayan’s intellectual approach to fashion continues to inspire. His experimental showpieces include the famous “coffee table dress” – a mahogany coffee table that morphs into a geometrical skirt – and the futuristic “womb” Lady Gaga broke out from at the Grammys in 2011. This theme of transformation has been revisited by the designer. His autumn/winter 2000 collection featured garments that doubled as sofa covers. Instead of trotting down the runway, Chalayan’s models interacted with furniture on stage.

His 2007 spring/summer series took transformation to another level. The entire collection conceptualised around the theme sent models trotting off the runway in outfits featuring built-in mechanisms which transformed floor-length Victorian gowns into 1920s flappers.

It’s not just showmanship that won Chalayan accolades as one of the world’s best fashion maestros, but his ability to combine spectacular optical effects and commerce in fashion. “The [showpieces] do have a role but, more importantly, they turn into wearable clothes which actually took the most time to construct,” he says.

Last year was an especially productive one for Chalayan. Alongside his own eponymous label, he took on a lot of responsibility, including designing French fashion house Vionnet’s demi-couture collection, relaunching Chalayan menswear after an eight-year break, and collaborating with famous architect Zaha Hadid to design costumes for the opera Cosi Fan Tutte which opened in May in Los Angeles. The production has made possible other high-profile creative collaborations such as Frank Gehry with Rodarte and Jean Nouvel with Azzedine Alaia. 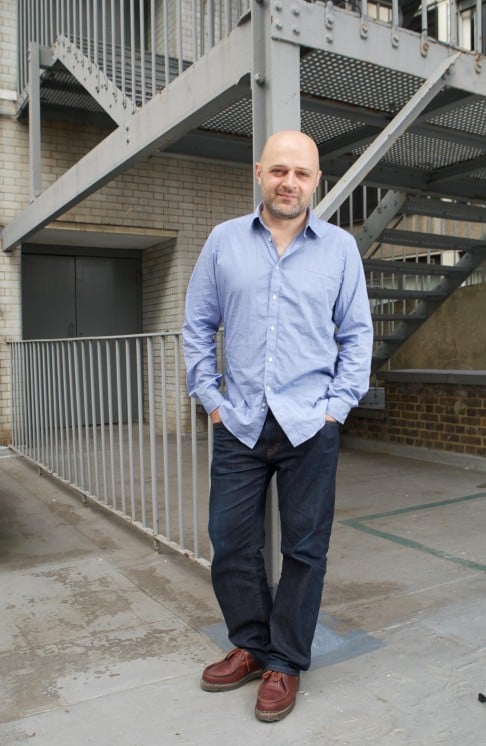 Hussein Chalayan is a man of many talents. Apart from fashion, he has also dabbled in art and theatre.

The disciplines may vary, yet the core of Chalayan’s design philosophy remains the same. “They are part of the same world,” he says. “Other projects help me discover new ideas that end up [inspiring] new collections.”

The result is a much-anticipated men’s capsule collection consisting of 22 styles, some of which Chalayan showed alongside his spring/summer 2015 women’s collection. Both collections are built upon Moorish inspirations. In the men’s collection, tailored silhouettes dipped in a kaleidoscope of light green prints inspired by Moorish weaves and jacquard patterns make versatile wardrobe staples.

Similar aesthetics and tastes are evident in Vionnet’s demi-couture series that Chalayan has taken under his wings for the past year. He has done two collections since.

The silhouettes and constructions of his latest collection for Vionnet bear Chalayan’s signature touch, yet are executed with Vionnet’s classism and elegance in mind – think knee-length tube dresses with extended hem lines tied into a knot on the side and two-tone gowns featuring colour-contrasting pleated organza appliqué. “It’s an honorary project in light of the House of Vionnet’s spirit and imagining what [its founder] Madeleine Vionnet would have liked if she were still alive today,” Chalayan says. 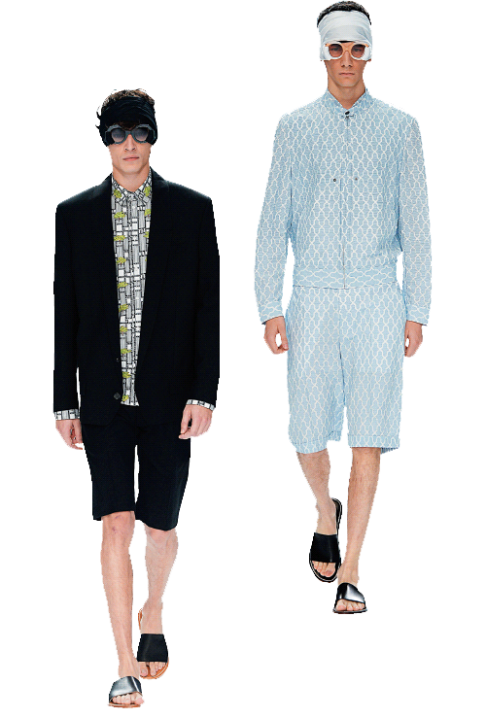 Chalayan is no stranger to collaborations. Prior to the Vionnet project, he has worked extensively with other creative units. He has worked as creative director of international labels including Asprey, TSE New York and Puma. His stellar list of creative intellectual collaborators include actors, artists, musicians, theatre performers such as Academy Award-winning Tilda Swinton, dancer-choreographer Michael Clark and artist Nick Knight. Chalayan says the criterion he looks for in collaborators is that they share the spirit of doing something new.

His recent collaboration with famous architect Hadid is on couture level, according to Chalayan. Designing costumes for performers is a couture project, he says. Although Hadid has been a long-time friend, Chalayan says the synergy of them working together was refreshing. “It’s like many blind dates that culminate in something very exciting at the end,” he says. “We both experiment and we are both interested in form and movement.”

Chalayan says he continues to be inspired by modern women and wants to design empowering fashion for them. “I believe in carefully considered designs executed precisely with a delicate sense of construction and finish,” he says.” The woman I like dresses for the occasion and can be masculine one day and extremely feminine the next. She is a warm, curious individual.”

Warm and curious, just what we could say about Chalayan. But then again, he has so many star qualities. 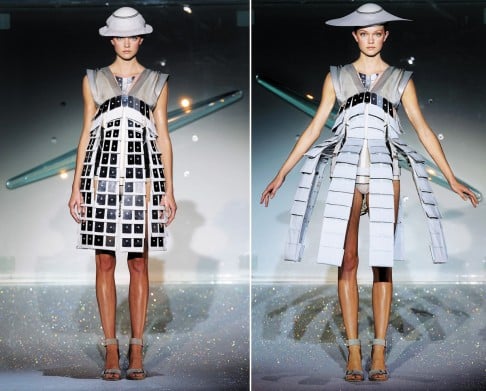 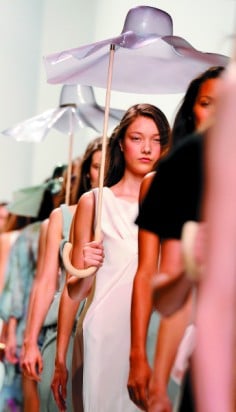 Gets an MBE in the Queen’s Birthday Honours List

Stages two exhibitions to show retrospectives of his work

Signs licensing agreement with Venetian-based manufacturer Pier S.p.A for the production and distribution of his womenswear

All the Science Fit to Air....and Some That's Not!

All the Science Fit to Air....and Some That's Not!