The travels of a manuscript: Rashid al-Din’s Compendium of Chronicles (Add.7628) – Asian and African studies blog.

Simerg - Insights from Around the World

Editor’s note: The following two mystical stories have been adapted from the August-September 1981 issue of The Unesco Courier magazine, which was dedicated to Islam and the Muslim world.

We present two extracts from The llahi-nama or Book of God by the great Persian mystic poet Farid al-Din Attar (circa 537-627 AH, 1140-1230 AC) translated into English by John Andrew Boyle. The translation, with a foreword by Annemarie Schimmel, was published by the Manchester University Press in 1976 and forms part of the Unesco Collection of Representative Works.

Doctor, pharmacist and perfumer, Attar, whose name means “He who trades in perfumes”, wrote a prose work containing much information on the mystics, Tadhkirat ul-Auliya (abridged English translation, Biographies of the Saints, 1961) as well as several major works of poetry. In…

Pakistani trucks are known around the world as moving canvases. These trucks are lovingly decorated by their drivers, who spend their days and nights driving them through the length and breadth of the country. Decked in vibrant colours and bells, inscribed with romantic couplets and even images of political personalities, each truck tells a unique tale. But with the arrival of transportation companies, which have large fleets of modern trucks with containers, the traditional truck art is becoming less common. 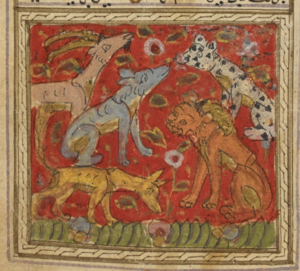 Double-page opening to the tales of the two jackals Kalilah and Dimnah, by Naṣr Allāh ibn Muḥammad, dated AH 707/1307-8. Here the king is enthroned on the left, surrounded by courtiers with two lions beneath and, on the right, hunting cheetahs, a horse and a hawk – See more at: http://britishlibrary.typepad.co.uk/asian-and-african/2015/08/cats-in-persian-manuscripts.html#sthash.zofw507e.dpuf

Since August 8th is International Cat Day, it seemed a good excuse to publish some of the more picturesque felines from the manuscripts we have been working with during the last three years of our project ‘Digital Access to Persian Manuscripts’. – See more at: http://britishlibrary.typepad.co.uk/asian-and-african/2015/08/cats-in-persian-manuscripts.html#sthash.zofw507e.dpuf

The first revelation to the Prophet was about knowledge and learning. The pursuit of knowledge is the central message of the Qur’an. The value placed on knowledge in the Qur’an became the foundation for the development of education among Muslims.

Sayings of Pythagoras, dated 13th-14th century Iraq or Syria representing an interaction between teacher and student as a traditional mode of transmission of knowledge and learning. (Image: Aga Khan Museum)

As Islam spread outside the Arabian peninsula, the new Muslim rulers came into contact with people who had relatively sophisticated ideas about theology, medicine, astronomy, and mathematics, and the rulers incorporated these new ideas into their own way of looking at the world. A vast movement of translation and development took place in Baghdad in the eight and ninth centuries, where scholars of diverse ethnic and religious backgrounds worked together and achieved scientific advancements.

The classical Greek literature was translated…

If you haven’t discovered marvelous Iranian cinema yet, you better get to it! To offer you a good start, here are five Iranian films from the 90’s. 90’s were good times for Iranian cinema – providing us with so many gems, so much diversity and originality.

1. The Wind Will Carry Us by Abbas Kiarostami

The film’s title is a reference to a poem written by the great Forough Farrokhzad  – which is already a promising start. The story follows a city engineer Behzad (with two other men) who comes to a rural village in Iran to keep vigil for a dying relative.

We see him trying to fit in with the local community and witness the way he changes his own attitudes with time. The main theme here is life and death, and approach to it is highly poetic. The beauty of the landscapes is captivating and serves the film so well. Great piece of art by Kiarostami –…