For centuries, shadow puppet theater not only captivated audiences across Southeast Asia but also held ritual significance for various local communities. Held outdoors at night, the performances unfolded around the simple setup of a stretched white cloth, lit by an oil lamp, on which the shadows of puppets would dance to orchestral music. Spectators would watch from both sides of the cloth; so rather than existing as simple black cutouts, many of these puppets boasted colorful, detailed designs, often crafted by the puppeteers themselves. The British Museum owns over 700 of these objects from Southeast Asia alone, and 85 from Indonesia, Malaysia, and Thailand are now on view in an ongoing exhibition. Used to dramatize folktales, local traditions, and epic tales, these ogres, clowns, villagers, court figures, and other characters today represent some of the oldest relics of a community activity that has experienced great change in the last few decades. 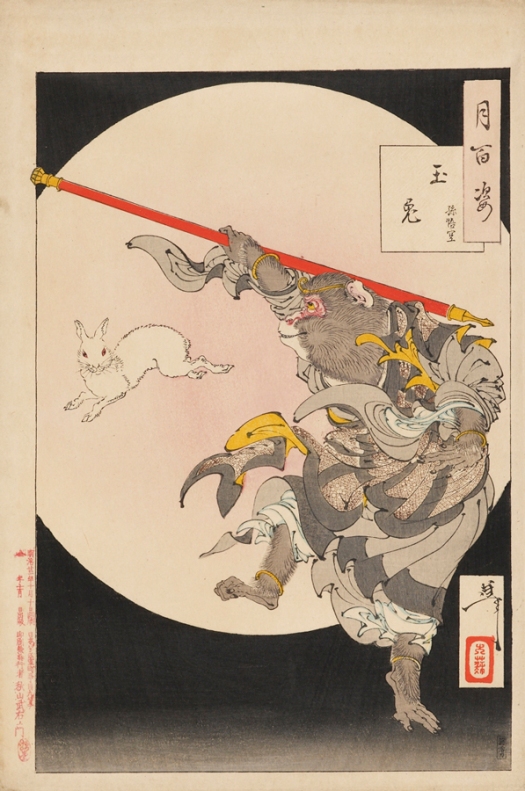 2016 is the Year of the Monkey according to the traditional Chinese lunar calendar. While the lunar calendar and its twelve zodiac animals are distinct to East Asia, images of monkeys feature in the mythology, folklore, art and literature of many cultures around the globe.

This exhibition, drawn from the Ashmolean’s collections of Asian art, celebrates the Year of the Monkey by showing images of monkeys from across Asia. It includes depictions of monkeys in their natural environment and highlights two of the mythical monkey figures best known outside Asia: the Monkey King of Chinese literature and the Hindu monkey warrior Hanuman.

Monkeys in the wild

There are many different species of ape and monkey native to the forests and mountains of Asia, ranging from baboons in the Arabian Peninsula to orangutans in the rainforests of Borneo, long-armed gibbons in China and India, and many varieties of macaque across the whole region. They are widely celebrated in poetry and literature and represented in art.

NEW YORK, NY.- Over a dozen of Europe and the United States’ leading dealers of Japanese art will present exhibitions during New York’s Asia Week, from March 13 to March 22, 2015. The wide spectrum of exhibitions will highlight the breathtaking range of the arts of Japan, from ancient terracottas to scenes of nature and of Japan’s emergent middle class entertainment to recent photographs of bodies emblazoned with tattoos. In 2015, the Japanese Art Dealers Association will hold its seventh consecutive collaborative exhibition of Japanese art by leading dealers in the field – the only regularly held mini-fair during Asia Week, one that dates back to 2009. JADA 2015: An Exhibition by the Japanese Art Dealers Association will feature over 60 works of art that span 2,000 years. The exhibition will be held at the Ukrainian Institute of America, 2 E. 79 St. in New York, for three days only, from March 14 through March 16, 2015. Asia Week draws to New York curators, art historians, collectors, and aficionados from all over the world for a week of exhibitions that reveal long-hidden masterpieces and fine works of art. It was established in by Sotheby’s in 1992. “The interest in Japanese art has continued to be robust over the past several years, and in 2015 JADA welcomes several new affiliated galleries to its ongoing effort to highlight exceptional Japanese art during Asia Week,” said Sebastian Izzard, president of the JADA. “Our members and affiliates look forward to a vibrant Asia Week with the arts of Japan among the week’s highlights.” Among the works in JADA 2015 will be an early bronze Dōka (ritual spear blade) from the Yayoi Period (400 BC-AD 300), exhibited by Mika Gallery, that is in exceptionally fine condition. An early and important 15th century calligraphy, Zen no Kaname, Principle of Zen, by Motsurin Shōtō (d. 1419) will be shown by Koichi Yanagi Oriental Fine Arts. Shōtō was a prominent calligrapher of the Muromachi period (1392-1573) and a disciple of Ikkyū Sōjun (1394-1481), the noted Zen Buddhist monk and poet. The provenance of Zen no Kaname, Principle of Zen includes Jinkōin Temple, one of the three largest Shingon sect temples in Kyoto. Other highlights include a remarkable and historically notable pair of circa 1800 six-panel screens, Places Along the Tōkaidō, a highly detailed work that pre-dates Utagawa Hiroshige’s landmark print series, The 53 Stations of the Tōkaidō. The screens feature hundreds of travelers in various landscapes and are both remarkably beautiful and a document that recalls a transitional moment in Japanese culture. They will be exhibited by Erik Thomsen Gallery. Dating from 1889, nearly a century later, is a pair of hanging scrolls by the 19th century master of several media, Shibata Zeshin (1807–1891), Carp Swimming among Water Plants. The scrolls illustrate the artist’s exquisite technique and his sense of play: the expressions between the creatures is all too human, a quixotic merging of nature and man. The scrolls will be presented by Sebastian Izzard LLC Asian Art. Illustrating a love of nature derived from spiritual adulation common in Japanese art are Landscapes and Birds of the Four Seasons, a pair of ink and color on gold-leaf six-panel Kyo-Kano screens (school of Mitsunobu/Takanobu) that date to the early 17th century. The beautifully painted screens, of rich colors and dynamic composition, are in pristine condition and were once in the Kyushu Daimyō collection, which included screens now in the collections of the Art Institute of Chicago and the Rijksmuseum in the Netherlands. They will be shown by Leighton R. Longhi, Inc. Oriental Fine Art. In addition to JADA 2015, the members of JADA will hold exhibitions at their individual galleries: Erik Thomsen Gallery; Koichi Yanagi Oriental Fine Art; Leighton R. Longhi, Inc. Oriental Fine Arts; Mika Gallery; and Sebastian Izzard LLC Asian Art. Eight prominent galleries affiliated with JADA – one from Asia, two from Europe, and five from the United States – that handle Japanese art will be exhibiting during Asia Week as well: Bachmann Eckenstein Japanese Art, of Basel, Switzerland; Floating World Gallery, of Chicago, IL; Giuseppe Piva Japanese Art, of Milan Italy; Hiroshi Yanagi Oriental Art, of Kyoto, Japan; Onishi Gallery, of New York, NY; Ronin Gallery, of New York, NY; Scholten Japanese Art of New York, NY; and The Art of Japan, of Medina, WA. The auction house Bonhams will be active during Asia Week, as well, and Christie’s will be holding its annual auction of Japanese art in April. Three notable and distinguished galleries that handle Japanese art have become affiliated with JADA in 2015 but will not be exhibiting in New York during Asia Week. Each is based in London, England: Grace Tsumugi Fine Art, Gregg Baker Asian Art, and Malcolm Fairley Ltd.

CHICAGO, IL.- The Art Institute is presenting an exhibition of Japanese prints by a mysterious 18th century Japanese artist whose identity is debated but whose output was remarkable for its innovation and imagination. Masterworks of Japanese Prints: Toshusai Sharaku will be on display through March 29, 2015, in Gallery 107. Toshusai Sharaku produced about 150 designs in a 10-month period between the summer of 1794 and the early spring of 1795. Before and after this period, an artist by this name is unknown, and therefore, Sharaku’s identity has been a matter of much debate. The Art Institute has one of the best museum collections of Sharaku’s work in the world thanks to the early efforts of collectors Clarence and Kate Buckingham. Most of the prints in this exhibition entered the museum between 1925 and 1934 as gifts from the Buckinghams. Sharaku’s earliest work consisted of 28 bust portraits of actors who appeared in the Kabuki plays presented at the three principal Edo (Tokyo) theaters starting in the fifth month of 1794. Each of these prints had a dark, shiny background made with a mineral silicate called mica. All of these early designs are bold portraits of actors in identifiable roles. After a few months, however, and as the peak of the Kabuki season approached, this format was abandoned and he began designing prints of two full-length figures. In many of these prints, white mica rather than dark mica is used. The technique of using mica became quite popular in the early 1790s but was later abandoned, perhaps due to governmental edicts. In his later prints, Sharaku turned to a yellow ground, smaller format for bust portraits. This exhibition, organized by Janice Katz, Roger L. Weston Associate Curator of Japanese Art, contains examples of all of the types of prints mentioned above. Also on view in a different gallery will be Blue Phoenix, a stunning pair of folding screens by Japanese artist Omura Koyo (1891–1983). These oversized screens present Koyo’s vision of a tropical scene complete with rare birds and exotic plants. Bright orange Flame of the Forest flowers form the backdrop for flashy pheasants with highly patterned plumage and blue heads. The work glows, not only because of the bright colors, but also due to the gold leaf that was applied to the underside of the silk on which the scene is painted. This pair of screens, Koyo’s masterpiece, was exhibited at a Japanese government-sponsored exhibition in 1921, where it garnered great praise and one of the coveted prizes.